What Are the Best Tamper Proof Screws? 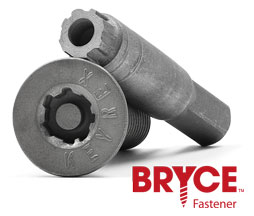 People often ask what are the best tamper proof screws and with so many options to choose from, it can get confusing. Tamper-proof screws have been around for over 100 years, creating many product options, but they are not always the best security options. If you want to know the most secure tamper proof screws, keep reading to learn more.

If you want to pick the right tamper-proof screw, they are both tamper-proof and theft-proof. To stop theft, there are 4 critical attributes needed that only a few tamperproof brands have.

All the screws in the Bryce Fastener line have these attributes (KeyRex®, Stykfit® 7, Penta plus™, Penta nut, Strip-lok™, and Wellhead nut.), which makes them the best for anti-theft security.

Why Bryce Fasteners Are the Best for Security

Bryce Fastener started preparing a solution over 20 years ago, purchasing machinery and developing new patented security screw drives that have proven to stop theft. As a result, KeyRex® has an ever changing keyway system with millions of variations that can be licensed to an individual company, so only they can install or remove.

Why should this matter? With the advent of offshore bit manufacturing and the lack of American patents, millions of security bits entered the market. A thief can now arm himself with a tamper proof removal bit kit for around $10.00, sold at retail and online. No security screw is immune except those from Bryce.

The Wellhead security nut is the same with billions of keyways. Stykfit® 7 and Penta nut™ are patented drive systems with controlled and monitored keys. Penta-plus™ is a proprietary key system also with monitored and tracked keys. Strip-lok™ is a new drive system that strips away removal fins at torque, becoming a permanent fastening.

Because Bryce Fastener makes both the security screws and matching keys, it allows it to control access to the keys. Only the owner of the screws can purchase the keys. No other tamperproof screw manufacturer in the world does this. This makes Bryce Fastener the best in the world at stopping theft.

Bryce Fastener specializes in high torque and holding power. Though Torx® with a pin has set the standard for torque in the security screw industry, all Bryce Fastener products exceed Torx®. This is because the patented technology of 7 fins, tight tolerances, and deeper drive depths, have created superior torques. In addition, a loose screw is not secure. Thus, when it comes to torque, Bryce Fastener provides the best screws for holding power.

Other tamper proof screws often overlook resistance to common hardware tools. Many security screw heads can be drilled or removed with wrenches alone. Other weaknesses include undersized center rejection pins, especially in Torx® with a pin and Hex with a pin. These pins can be easily knocked out with a screwdriver and then removed. Bryce Security fasteners have enlarged center rejection pins and sharp heads that repel all known wrenches. They have proved to be theft proof and supremely secure in the most difficult of security environments where these tools have attacked them. Thus, Bryce fasteners are the best at repelling tools found in toolboxes.

Delivery is important, for a back ordered tamperproof screw does not secure anything. Bryce Fastener has inventory and over 100 machines ready to manufacture on demand. Special orders are under 8 weeks and often in 2. No other manufacturer in the world can meet those delivery times. Therefore, the delivery advantage of standard security screws is mitigated. If theft proof security is essential, delivery should not be a hindrance when you order from Bryce Fastener.

Get the Best Tamper Proof Screws

Change is difficult, especially if you have used traditional tamper proof screws.  When should you make the switch?  The Rule of thumb is if the “cost of the security loss” could exceed $100.00 per installation, a theft proof screw is necessary. Things like security kiosks, ride share bikes, coin boxes, art, copper, armaments, infrastructure, communications, water, gas, electric, house arrest leg bands, catalytic converters, solar panels, Etc.  all fit that bill.   There are many others that fall into that category.  A security screw that stops theft is the best for those applications.  It will be worth the effort in the long run, and save money.