What is a Tamper-Proof Screw?

There are many Tamper-Proof screws to choose from with the most common being; One-Way, Drilled Spanner, Hex-Pin, Torx-Pin™ and Key-Rex®. Each of these fasteners has an interesting history about how they became popular. We thought we'd shed some light on what Tamper-Proof screws are all about and which ones are the most secure.

Torx-Pin™ (Six-Lobe with Pin, Tam Six-Lobe, Star, Tam 6-Lobe™) is the universally preferred security screw in the market today (2020) based primarily on tradition rather than the security needs of the customer. When I, (Bryce Campbell, CEO of Bryce Security Fastener) began selling security screws in 1975, Torx-Pin™ was not preferred or even widely known. Earlier models of tamperproof screws such as One-Ways, Drilled Spanners, and Hex-Pin dominated the market. A One-Way screw was the first security fastener that became widely used. It was originally made for securing bars onto windows. How else would you properly secure a jail made from Wood and 19th century technology? Even now you’ll find One-Way screws securing most screen doors and barred windows. The biggest problem with One-Ways is that they’re nearly impossible to remove. This is a big problem for any installation that eventually requires the movement or removal of the items they secure.

The Drilled Spanner (AKA Snake Eyes® coined by Tamperproof Screw in New York) was developed in the 1930’s to secure operating panels located inside self-service elevators. To this day, Drilled Spanners are still found in modern day elevators after nearly a century (despite being frustrating to install due to their low torqueing ability).

Hex-Pin™ tamperproof screws came to popularity with their use in telephone booths. It started with simply securing the fan in the ceiling and then spread to other components throughout the phone booth. If you can even manage to find a telephone booth in today’s world, they’ll usually have Hex-Pin™ screws securing them. Because a Hex-Pin™ drive is easier to install than a Drilled Spanner, eventually Hex-Pin™ became the more popular tamperproof screw. After making waves in phone booths, the prison industry caught on and started using them to the point where they became industry standard. Just like Hex-Pin’s™ predecessors before, a weakness was discovered, which turned out to be the inability to torque tightly without the drive stripping. This is where Torx-Pin™ won the fight among all other security fasteners.

Torx-Pin™ became popular mid 1980’s because of its high torqueing ability. Prisons, commercial bathroom stalls, and playground equipment made them popular and they quickly replaced Hex-Pin as the best tamperproof screw. Despite Torx-Pin™ providing the highest levels of torque among other security fasteners, prisoners still found a way past them by heating toothbrushes and molding them to match the Torx-Pin™ drives. Even with this hole in security, most prisons today continue to use Torx-Pin™ (except for maximum security prisons which frequently upgrade to Bryce Security Fasteners). Torx-Pin™ has been around for so long that tradition and half-century old government mandates have made it the most used security fastener worldwide.

Why Are Security Screws No Longer Secure?

It’s simple really. Security screws are one of the best and least expensive anti-theft devices available IF, thieves don’t have access to the matching bit. Security fasteners are more difficult and time consuming to remove than traditional locks. The problem is tamperproof fasteners are widely used and patent protections have run out. Now the demand for bits has made all security fasteners victim to mass-manufacture and distribution. The average person can easily acquire a 100-piece kit of security bits for about $10. All the prior drives I’ve mentioned including several lesser used alternatives are now completely accessible and removable within a short window of time. With this easy acquisition of matching bits, comes the end of traditional security screws being secure. This leaves security professionals with an ultimatum. Do they stick with traditional security fasteners knowing they’re assets are left susceptible, or do they travel a new path to higher-level security fasteners?

In 1984, Bryce Fastener was the 4th largest security screw distributor in America. The market was booming as a result of jails being constructed left and right. At the time we sold all the traditional styles (Hex-Pin, Torx-pin™, Drilled Spanners, & One Ways) with American manufacturers making our products. In 1996, we received word from one of our customers (a major hospital) that despite using the Hex-Pin security screws we sold them, they experienced a major theft. Someone stole $40,000 worth of computers from the hospital. They reached out to us and asked if we could design something better and unique to them. The result was the basis of our Keyed-Lok™ drive( now called Key-Rex®), individually coded to that hospital and not sold to anyone else. This experience made it quite clear that the security fastener market needed bits that could not be cloned or easily acquired. From this point on we shifted our focus in building the infrastructure and manufacturing capabilities to provide this higher-level of security. Since 1996, Bryce Security Fastener has been serving those who need higher-level security screws, bolts, and nuts with near 100% effectiveness at securing our customers applications.

When to Choose Bryce Fastener for Your Security Needs?

The first question to ask yourself is what am I securing? What are the replacement costs if someone steals or tampers with your application? Are you securing trade secrets or protecting intellectual property? How much money will your organization lose as a result and what will theft or tampering do to your bottom line? With those questions in mind, we suggest anything over $100 at stake might benefit from using a Bryce Security Screw, Bolt, or Nut. 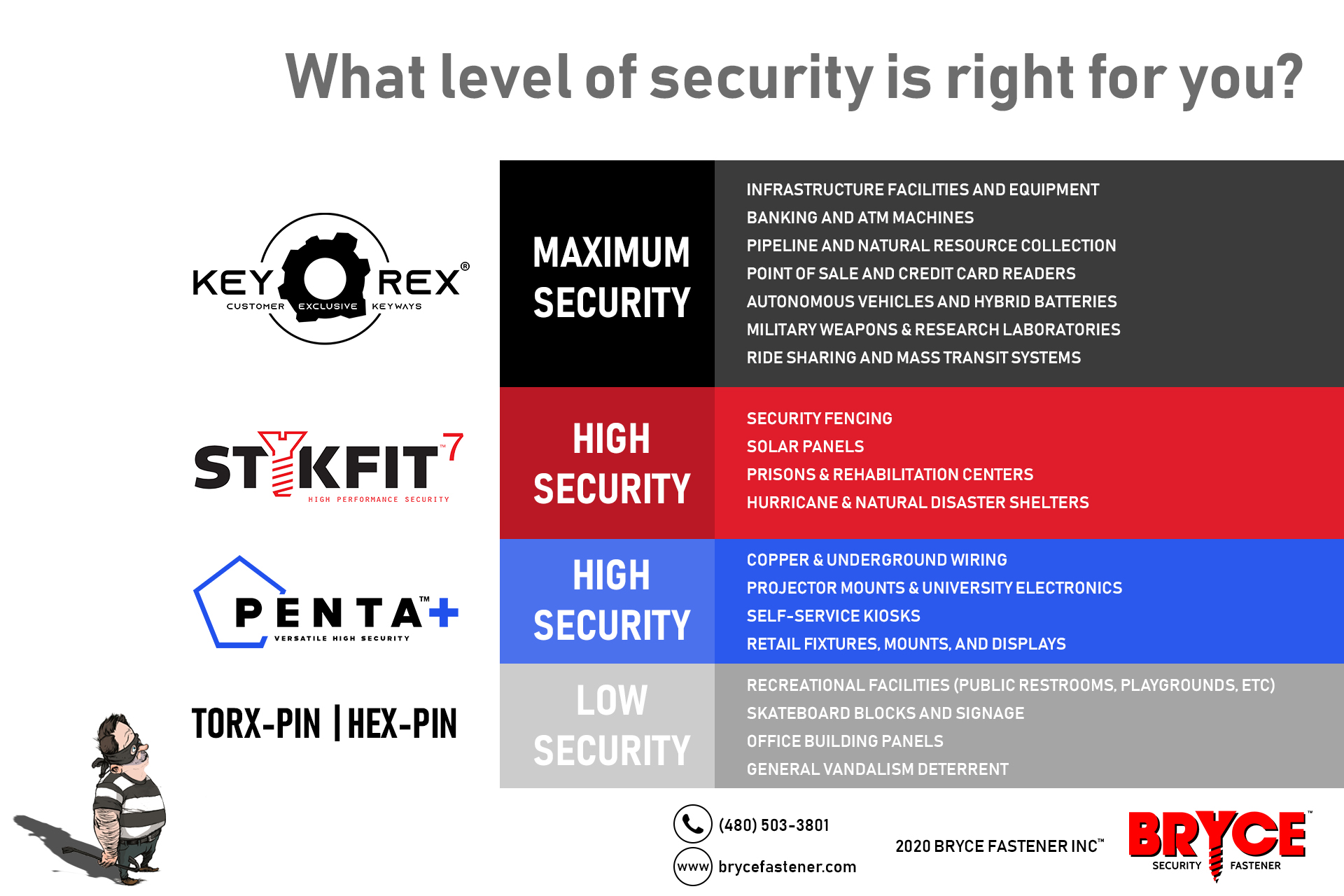