What's the Least Expensive Tamperproof or Tamper Resistant Security Screw You Can Buy?

Which Security Screws are the best to buy?

Security screws are expensive and varied, so which are the best to buy? This is a loaded question because there’s a huge hidden cost associated with tamper proof screws. The question to ask is, “what’s the cost of the loss?” A potential “cost of loss” can range from a few $100 to $500,000. It cannot be overlooked.  Take, for example, our small local town of Mesa, Arizona. They experienced over $300,000 loss due to copper theft in one year. Copper thieves were targeting light poles, utility boxes and manhole covers for their easy access to copper wire. Mesa's “cost of loss” was so high because Penta Bolts have easy to access removal tools and would not stop theft. They came to us and the slightly higher price of our security nuts was worth it. Immediately, theft stopped in areas where our tamperproof security nuts were installed. That was 3 years ago and counting. Mesa’s “cost of loss” called for a higher price security fastener to help solve their major problem.

One grocery chain had an incident where credit card readers were replaced with counterfeit terminals containing skimmers. Over $1,000,000 was emptied from customer bank accounts in a weekend. They secured their POS terminals with our tamperproof security screws. To date, they've stayed safe. One customer thought Hex-pin screws were just as good as our Penta-Plus™ and bought them based on price. He used Hex-pin fasteners to secure stereos in his chain of auto parts stores. Unfortunately, that auto part chain also sold security bit kits. Thieves stole the security bit kits first and then used them to steal stereos. Think of the embarrassment of the decision…and then the cost. 50,000 screws had to be replaced and stereo displays re-engineered. You may be small in comparison, but consider what a loss would cost to you, as well as the cost to reinstall, a potential lawsuit, and the worry? These hidden costs are real and must be considered before you buy.  The price of a security screw is immaterial in comparison to the “cost of the loss”.

Considering the hidden costs, which is best?

For my money, I want a security screw that's really secure, one that’s been vetted for all potential threats and proven effective over the years. That makes the decision a lot narrower, for Bryce Fastener is the only company that can do this. We offer the best security tamperproof screws in the industry.

If you need to secure a $100.00 sign in a school, tamper resistant screws (Hex-pin and Torx-pin) are sufficient. But, if you manufacture house arrest leg bands, provide cable TV, secure nuclear power plants, protect government secrets in White Sands, New Mexico, hang art in Paris, place vending machines in public, or install solar panels, you need Bryce Fastener’s tamperproof screws. One minor breach can cost more than the cost of all the cheaper tamperproof security screws installed. These are satisfied customers of Bryce…which is testimony to the high level of our security screws.

Below is a picture of an inexpensive security bit kit sold retail. It contains the most common tamper proof sizes including Hex-pin, Torx®. Tri-wing®, Torque-set® and Drilled Spanner (snake eyes®).  Robertson and one-way removal tools are often found in larger bit tip kits too. 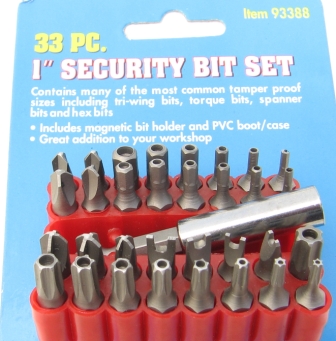 We believe these drive styles of security screws are not the least costly to own, especially if you’re securing something worth high value. Unfortunately, cheaper tamperproof security screws are specified for our prisons. Unless you also back up your assets with guns and barbed wire, we suggest you find something more secure. Inexpensive Tamperproof screws may end up costing you more.