She Has Arrived... Her Name Is TEK 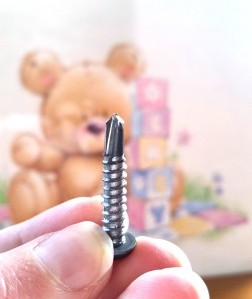 We’ve been trying to give birth to a new self drilling security screw for the past year and she’s finally here! She looks prettier than any other I (Bryce) have seen. Her tip is straight, her threads are sharp, and her head is put on square.

When I first began in the fastener industry, self drillers were just emerging. They wobbled back then. If they’re not made with a dead straight drilling tip, they wobble when power driven. TEK fasteners were made on machines that just couldn’t get it right. We found a used machine that, with the help of our Manufacturing Director Jesse Medrano and tool maker Juan, got a security self drilling fastener right.

Birthing a security self drilling screw in America is not an easy thing to do, most find their origins overseas. Torx® with a pin is the most popular one available in America. They don’t work very well. The tolerances are too great between the security bit and security screw. If you combine this with an off center tip, the product produces more frustration than help. The security aspect has been compromised by the over-abundance of Torx® security screw bit tips in circulation. Bryce Fastener’s new security self drilling screw, TEK will solve these problems.