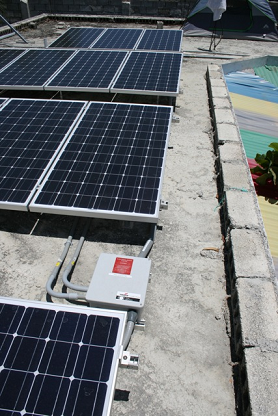 We are proud to have played a role in Advanced Solar Industries solar project in Haiti. ASI came to us with a need to secure their solar panels to the roof of a clinic in the poverty stricken area outside of Port au Prince. In this case, we were able to donate the needed security fasteners. Of course donating our fasteners might not always be possible, they are ALWAYS available at a highly discounted rate to solar installers needing a low cost, effective, anti-theft device for solar development in impoverished countries. 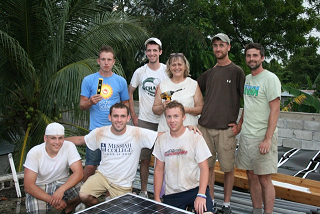 Advanced Solar Industries used Bryce fasteners to install a 3.99kW array on a clinic vital to a community outside of Port au Prince, Haiti. The free clinic is run by the non-profit group Project In Development and will provide electricity to over 25,000 members of the rural community there. “Solar provides reliable and quality power for the clinic making energy not just a convenience, but a necessity to transforming the lives of the people they serve,” says Chris Byers, Outreach Manager for Advanced Solar Industries. “Security is a major concern down there, so it helps me sleep at night knowing we have that added layer of Bryce protection for the system,” adds Byers.

Advanced Solar Industries knew that having a strong theft deterrent in place as well as a sophisticated back up system were the two key elements in making an operation like this work, that’s why they chose to use Outback Power System and solar industries top selling anti-theft device, Bryce’s “Key-Rex” with “Raptor™” feature. Before the solar installation, poor quality power from the city (low-voltage) resulted in light bulbs, computers and other sensitive equipment experiencing failure and damage. Because the city is only capable of putting out quality power intermittently, the Outback Power System only allows quality power from the city to feed the loads. If the power falls out of the pre-programmed, acceptable range then the Outback Power System will switch to solar power. The 21 MAGE M190 modules were mounted on Solar Wedge- 5deg tilt kit racks using Bryce’s Key-Rex with Raptor™ fasteners.

The Key Rex with Raptor™ feature is designed to integrate high-security theft protection, high-strength, and better grounding potential for solar panel mounting systems. Private, highly-controlled keyways keep unauthorized personnel from breaching the panel, while larger head style and pin provide 30% greater torque strength than standard fasteners. The deep Raptor serrations underneath the head not only prevent loosening over time due to thermal expansion and contraction, but also double up on the grounding effect of the screw. Raptor has been tried and tested by top solar companies such as SunPower Corp., REC Solar, Inovus, Sun Light & Power and has quickly given rise to its claim of being the most secure and theft-proof fastener in the world.