Copper Theft Protection - It's Easier Than You Think! 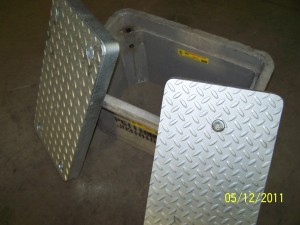 City and state governments across the country are suffering huge losses to copper wire thieves. Copper prices are reaching all time highs and, with the suffering economy, copper theft is exploding. Most of the losses occur at the in-ground junction pull boxes and the light poles that they feed. Unfortunately, new laws to clamp down on recyclers have had very little effect on the overall problem.

There is increasing evidence that a significant percentage of the copper wire stolen is not making its way into recycle, but instead is taken by dishonest contractors for reuse. Recently, a shipping container full of stolen copper was found before it made its way to the Far East…a clear indication that organized crime is at play.

There are many attempts to use different approaches to combat the problem. Liquid Nails is even being used to glue the lid of pull boxes shut. One city official told me that they were placing 3000 lb concrete blocks on top of the pull boxes. News reports from one city described filling in the light poles with cement up to the handhole covers. Some are burying pull boxes and others have tried using tamperproof screws and bolts in the past. Unfortunately, most "tamperproof" products on the market are no longer secure since the drivers are available at the retail level and online, and are therefore in the toolboxes of a majority of contractors.

Most of the above-mentioned options will help to slow copper theft, however most of these options result in the serviceability of the pull box or light pole being too cumbersome, expensive, or even impossible.

After losing $300,000 worth of copper in 2010, one city in Arizona took another approach. Using a new type of highly controlled fastener, the city was able to use them to replace all of the standard pull-box cover bolts. They took further steps to insure that only city personnel had access to the special drivers that remove the fasteners. Even the city electrical contractors are not allowed access to the special keys. When a contractor completes work on any given project, the city sends out maintenance personnel to install the special keyed fasteners in place of the standard hardware. This inexpensive approach to the problem resulted in a 90% reduction in copper theft in the first year. With this simple fix, pull boxes remain fully serviceable.

Commercial areas and city parks were a little more difficult to protect…with nobody around to stop them, the thieves were able to break through the lids with sledge hammers to gain entry. This particular city fabricated and used a heavy steel strap and, combined with their special keyed fasteners, were able to finally stop the problem. Again, the pull boxes remain serviceable. This city recently reported that they have not had a copper theft in the past several months.

The Department of Transportation in another state reported a $500,000 loss during a six month period. Entire stretches of freeway have gone dark as a result, a dangerous situation for motorists. This department is currently in the process of designing and building a new hardened pull box lid for use along freeways. They are also planning on using highly controlled specially keyed fasteners in their lid design.