Tamperproof Screws Are History... The Age Of High Security Screws Has Begun 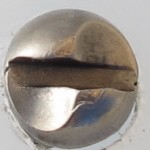 The tamperproof fastener industry has a very long history and continues to evolve. The industry actually dates back to the early 1900s when the one-way screw was first patented in Italy. These early tamperproof screws are commonly seen in public restroom fixtures even today.

The drilled spanner was the next step in the evolution of tamperproof screws. Way back when and even today…drilled spanners can be seen in elevators protecting the control panel from unwanted entry.

Both the one-way and the drilled spanner have their draw backs…they are slow to install, torque is limited and they are not suitable for power driving but they were the only thing available and served as a good deterrent at the time.

In the 1960s, the skyrocketing popularity of aluminum mag wheels created the need for some type of security fastener to stop the theft of these expensive accessories. McGard came out with the "wheel lock" that offered multiple different key codes. These keyed fasteners answered the need quite nicely. Although the key codes are limited in number and the fasteners are quite expensive…these key coded fasteners continue to lead within that market.

For many years standard socket head screws were drilled and a rejection pin was pressed into the hex drive one at a time. Then sometime prior to 1970, a company called Safety Socket figured out how to cold head socket head screws with a rejection pin. The hex-pin was then viable for the mass market. The first power drivable security screws were then available to the mass market and at the time were very secure. Although still not great, the hex-pin could be power driven and had much better torque than earlier tamperproof screws.

In 1972, Torx™ added the security pin to its already popular high torque drive and obtained patent protection. This became the security fastener of choice for many years thereafter. In 1994 as patent protection had expired… Torx-Plus™ was introduced and patented. The difference being… it has five lobes instead of six and the lobes were shaped in a way that offered better driver bit life. The patent on Torx-Plus™ expires in 2012.

In the late 1980s, Bryce Fastener began manufacturing the pentagon shaped drive with a rejection pin. Even after 18 years the Penta-Plus™ design remains extremely secure. The reason for this is that all driver bits are made in house at Bryce Fastener and driver bit sales are controlled and never sold through distribution or to the general public. If a potential customer intends to resell driver bits with their product, Bryce Fastener declines the sale.

Over the past 25 years there have been a few others like tri-wing, Philips-pin and tri-groove. Out of all of the security screw designs mentioned in this timeline, only two drive styles, Penta-Plus™ and Torx-Plus™, are considered to have any high degree of security. All of the others drives have been compromised by the mass production and wide distribution of driver bits from overseas. They can now be purchased at retail.

In 2004, Bryce Fastener introduced keyed-Lok™. Customer specific key codes make it a high security fastener but the torque is somewhat limited and the main complaint is that slotted screw drivers could get down around the rejection pin. This led to the development of Key-Rex™, also from Bryce Fastener, which was patented in 2006. Also custom keyed, the Key-Rex™ design has a larger rejection pin and the torque is much higher. The Key-Rex™ product has virtually thousands of key codes available which makes it virtually impossible to copy and sell at retail.

Going forward, manufacturers like Bryce Fastener will without a doubt…experience rapid growth. The high security fastener market is growing very quickly as age old tamperproof screws no longer offer any real security and are not worth the investment. If you need to protect anything of value, custom keyed fasteners are the only truly secure choice in the market today.